The best ski resorts in France 2020

Some people might be sad about the end of summer. But for us powderhounds, plunging temperatures leave us giddy with excitement. The last few leaves falling from the branches? The letters spelling S-K-I S-E-A-S-O-N flash like a Broadway marquee in our heads.

The perfect blue skies and the sound of your skis carving the snow become regular stars of your dreams.

All you can think about are meters of fresh powder and French cheese so good you could have a relationship with it. You know what we’re talking about. French Alps ski resorts are some of the best ski destinations in Europe and they’re calling your name. 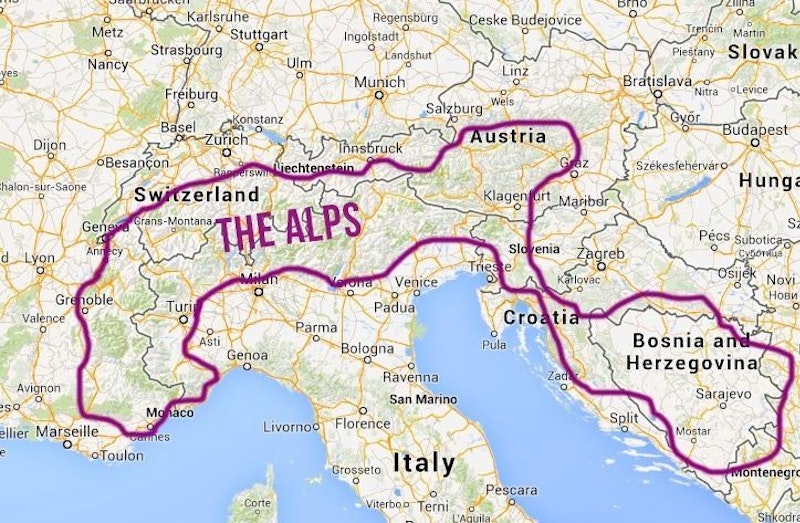 Map of the Alps

It’s time to plan your skiing holiday to the French Alps. If you only get one ski holiday, you need to be sure to ask all the right questions: “What’s the highest ski resort in France?” “Where’s the best snow in France?” “What ski resort gets the most snow in Europe?”. The French Ski Resorts are truly some of the most extraordinary places in Europe.

It’s important to pick the place that has a perfect balance of great snow, affordability, pistes for the whole family and good after-ski activities.

The French Alps aren’t as expensive as you think 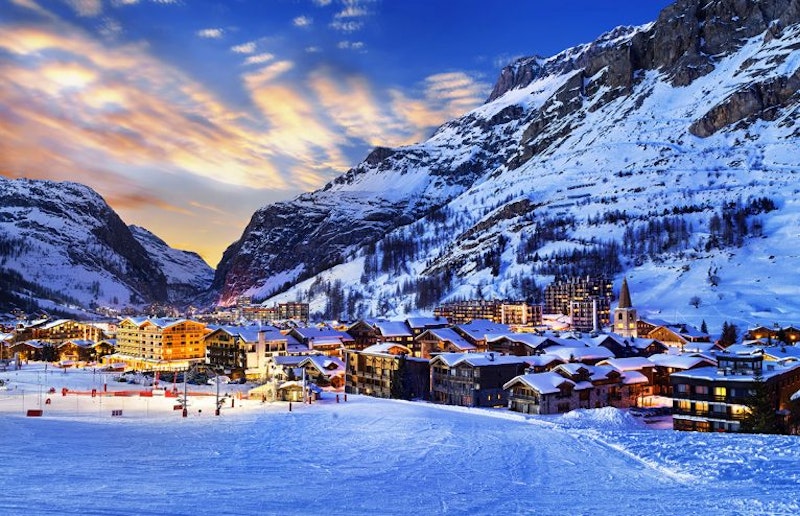 Chamonix at night during winter

You want the fresh pow.

You want the luxury French cheese.

You want the best ski destination.

But you don’t want to fork over an amount of cash that inspires you to get in the fetal position. We’ve been there.

It’s understandable. Luckily, the Alps have ski resorts in France that check the boxes and won’t make your bank account weep. If you avoid the main tourist traps, you can easily have an amazing experience in the French Alps for relatively cheap.

Before, you’d have to fly all the way to eastern Europe to be able to ski on a budget. Now you can have all the beauty of the Alps affordably right in France. In fact, skiing in Europe already costs about half of what it costs in the US.

And the French Alps are just as impressive as the Swiss peaks but at a fraction of the cost. Some of the most beautiful Alps scenery is in France: it’s home to Mont Blanc, the Alps’ tallest peak. It’s where you’ll find perfectly quaint towns equally suitable to wilderness extremists and safety-first families, like Chamonix and Avoriaz.

Some French Alps ski resorts, like Portes du Soleil, are so big that they offer both luxury and budget accommodation for the same place. It’s accessible to everyone!

Ski slopes for people of all levels

In the French Alps, you don’t need to choose between wilderness-ambitious or baby ski. There’s something to enjoy for every level.

Skiers and snowboarders of all swathes congregate to the French Alps, from families and couples looking for wide-open pistes to the more serious

For the adventurous who crave off-piste terrain or un-pisted black runs beyond the boundaries of the groomed snow, the French alps offers favourites like Chamonix and La Grave. Not only you´ll be able to stay in a wonderful Chamonix accommodation, this resort is also one of the most internationally iconic names in vertical descents and off-piste skiing. But it’s not just for die-hard black pistes. 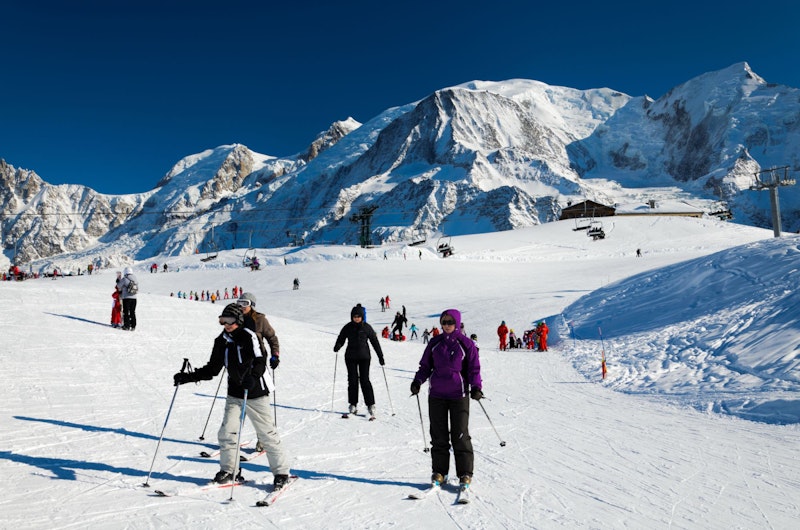 La Flegere, only a 5 minutes’ drive up from Chamonix, has greens and blues for kids and beginners. On top of that, there’s the Libellule green piste where kids can test their wits on an obstacle course and a Mont Blanc Legend playground.

La Grave, on the other hand, is a ski resort in France that has the most extreme slopes in the world. La Grave is a 30-gondola pulse lift that takes you 2,100 meters up a mountain and drops you off above some of the most unruly terrain you’ll ever see.

Just next to it, there’s something for those with more intermediary tastes: La Chancel offers easy off-piste for those not wanting to stick to greens and blues but don’t yet want to feel like they’re jumping off a cliff on purpose.

The French Alps have the best snow 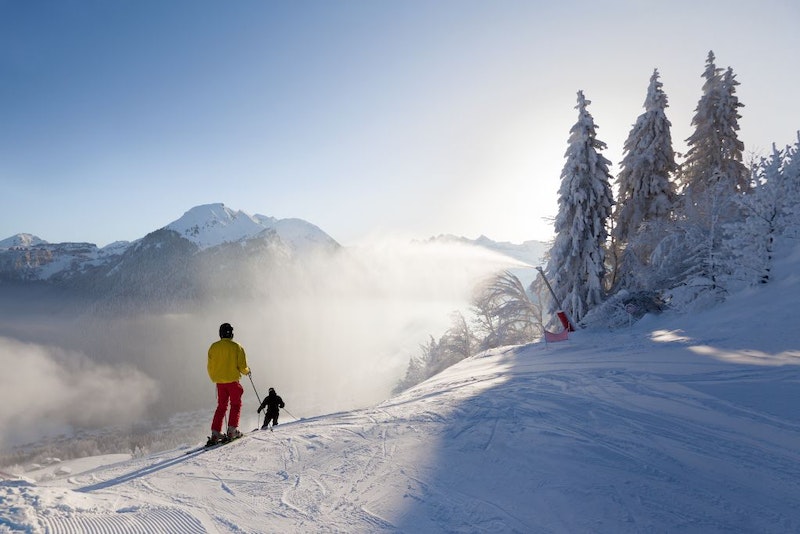 Ski slopes in the French Alps

When the only thing that can top the quantity of the white stuff is the quality, you know you’re in for a good ski day in the French Alps. Many French ski resorts in the Alps have guaranteed snowfall.

Not only is it home to Mont Blanc, the tallest peak in Europe, but there are 23 other peaks that soar over 4000 meters.

Val Thorens, for example, is not only the highest ski resort in France but the highest in Europe, making it one of the best ski destinations. The village itself is at 2,300 meters while the lifts take you all the way up to 3,200 meters.

The French Alps has plenty of lofty mountainsides above 2000 meters where the snow stays in pristine condition. North-facing slopes, like in on the Argentiere glacier in Chamonix and one whole side of the Les Menuires valley guarantee shredding of only the highest grade. Plus, this is a nice place to see the peaks from your Chamonix accommodation.

The highest point in Avoriaz, right within the Portes du Soleil (and close to our Morzine accommodations), looms at nearly 2,500 meters. In the French Alps, fresh powder is seldom in shortage.

French Cheese and all the glories of Alpine cuisine

In the French Alps, ski on high-grade snow and affordable quality pistes and some of the best ski resorts in France are only some of the pleasures: its gastronomy will take you on a sensory experience that isn’t quite flying down a piste, but it’s close.

You probably know that you need to try fondue, which literally just means ‘melted’ in French (referring to the melted French cheese). It’s apres-ski o’clock and you’re probably ravenous.

If you’re still on the melted cheese vibe, you also need to try raclette.

Raclette is a whole ritual, served at the table using individual grills, where each person melts their cheese to their liking. Then you plop it on top of whatever accompaniment you have: potatoes, pickled foods or dried meat.

Le Farçon is another Savoyard dish you need to try, which is a rather heavy, sweet and salty cake made of potatoes, cream, dried fruit, and bacon. It sounds weird, but it’s so good. It’s one of the most famous recipes of the region.

If you’re tired of savory and cheesy stuff, you can try the tarte aux myrtilles, which is a not-to-miss blueberry pie, a ski holiday favourite.

An environmentally friendly ski holiday in the French Alps

The climate catastrophe makes it hard to justify taking a ski holiday. Global temperatures are expected to rise 4 degrees by the end of the century. This is quickly reducing the surface area available to skiers. On top of that, the rising popularity of winter sports pushes resorts to use snow cannons, which use a lot of water and may contaminate waters.

So how can we reduce our impact on the slopes?

The moral-driven don’t need to feel so guilty for hitting the best ski resorts in France in 2020. French Alps ski resorts are aware and many are working hard to reduce their environmental impact on many fronts.

One big change is that the best ski destinations are now more easily accessible by train. Where driving to Val Thorens from London could use up to 225 kg of CO2 (and a one-way plane 85 kg of CO2), the same train uses only 14 kg.

In 2010, Chamonix launched a climate and energy action plan, aiming to cut carbon emissions by 20% by next year. It launched a public transport plan to achieve this goal as well as funding initiatives to make housing more eco-friendly.

The French Alps have the cutest towns

Yes, we do want the best ski destinations for the fresh powder and high peaks. But another wonderful thing about the best ski resorts in France is the cute, cobble-stoned villages that you can sleep in.

Megeve, for example, is a traditional Haute-Savoyard village that offers all the quaint cuteness you could dream of stoned alleyways, smokey chimneys with the Mont Blanc as a backdrop. It maintains its traditional Alpine architecture and hasn’t given way to tourist traps that overtake so many ski resort towns. On top of that, this resort has a Michelin-starred restaurant, and be ensured that your Megeve accommodation will be ultra-luxurious to match! 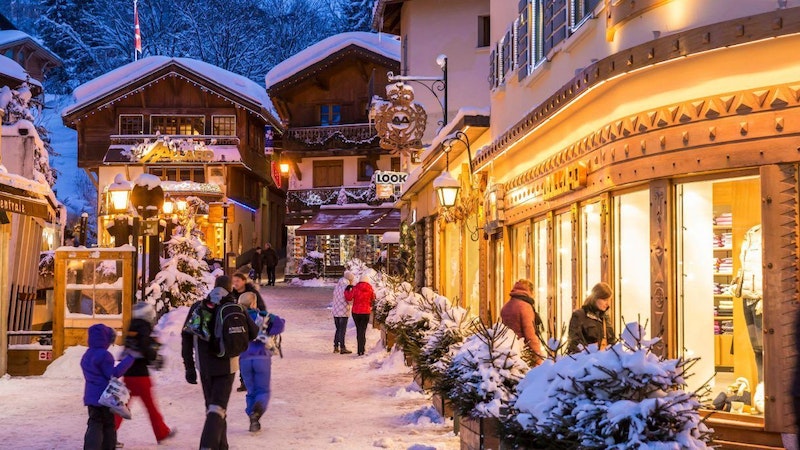 The village of Megeve by Marie Claire UK

Chambery has kept its 13th Century charm and has a historic centre with some serious charm. Its castles and pine-lined streets are especially delightful when covered with a blanket of snow.

Then Chamonix, a high-mountain town nestled between alpine meadows and lush forest is also at the foot of the Mont Blanc. People come to Chamonix for the extreme ski but also for its authentic alpine town feels. We have plenty of luxury chalets in Chamonix for your stay. 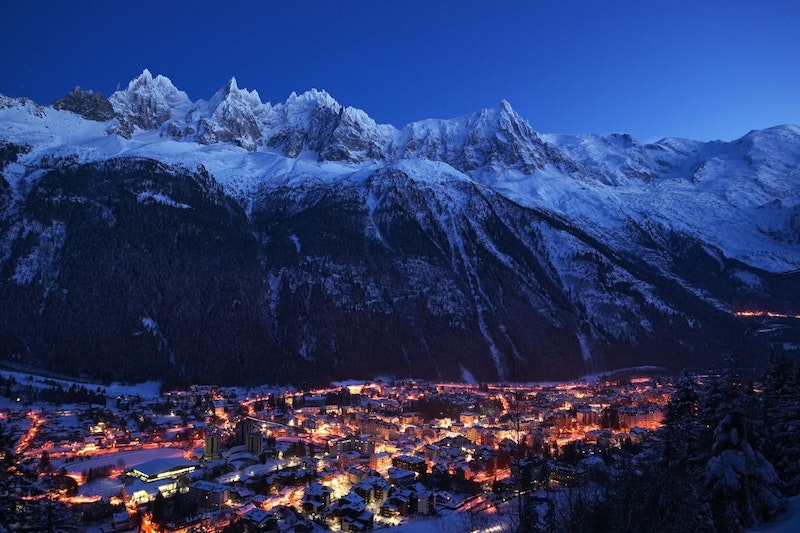 Chamonix valley by night during winter

The best ski resorts in France are in the Alps

The French Alps are for everyone: lovers of food, extreme alpinists, families, kids and couples, and people who are looking to have a beautiful, authentic ski vacation without breaking the bank (and those looking for a luxury experience).

It’s close to home but will take you away. Which ski resort will you go to?