For the most part, a skiing holiday in the French Alps is a sporty holiday. You wake up early, you eat relatively healthy (or plan to), you stretch and hit the slopes. But not everyone wants to hit the hay early during their ski holiday. If you’re one of the many who enjoy a good apres ski, here’s a list of the best party ski resorts in the French Alps.

Sometimes, the best memories of your ski holidays aren’t made on the slopes. Sometimes you make them after (apres) skiing.

While some of these party ski resorts have an outdoor terrace you need to ski down from (careful!) others on this list have bars and nightlife in the towns themselves.

Ready to see where the best party ski resorts are in the French Alps?

Chamonix, one of the best party ski resorts in the French Alps

Chamonix isn’t one of the most famous ski resorts in the French Alps for no reason.

Photo from Investors in Property

It’s famous for its mix of extreme vertical pistes, its epic view on the Mont Blanc massif, and its wide-ranging and epic terrain. But it’s also known for its nightlife.

Even though we love cozying up in our Chamonix accommodation, this resort has a nightlife that must not be missed! It is a perfect setting for any kind of ski party holidays, whether you like a quiet night in a bar, loud music right on the pistes, or a lush escapade in a nightclub that ends in the wee hours of the night.

Most people will have heard of the famous Chambre Neuf, the liveliest and loudest apres-ski in Chamonix. It’s open all day, from 8 a.m. to 10 p.m. and attracts many different kinds of people. But Chamonix has far more to offer than that.

To start your night off, Chamonix has plenty of bars for all kinds of tastes. Some of our favourites are:

A trendy bar with a large menu of tasty and creative cocktails and a beautiful terrace overlooking the river.

If you’re looking for a good pub where you can have a good pint and listen to good music, this is the bar for you.

Another option for pub lovers is The Office Bar, where you can drink good beer and enjoy burgers and even fish & chips.

Beer connoisseur? This micro-brewery offers a wide selection of craft beers for your apres-ski with style.

Not a fan of beers? Chamonix also has a wine bar, where you can also try locally-sourced snacks. The owners of this bar are super nice.

If you don’t fancy hops or grapes, perhaps a cocktail will do the trick. And as you may expect, Chamonix has a place for you. This place has a cosy atmosphere with techno-house music. Perfect for a night out!

Another cocktail bar with a carefully decorated interior, for those who enjoy the finer things in life.

But the Chamonix nightlife goes beyond just the bar scene. It also has some fantastic apres-ski nightclubs for those who want to dance. The nightclubs open until very late in Chamonix are:

L’Amnesia: One of the largest nightclubs in the area, this Chamonix nightclub is open until 4 a.m.

The Bunker Nightclub: If you still have party juice after the last two, you can pop over to the Bunker. It’s open until 7 a.m. and has 45 different flavoured vodkas! Just don’t blame us if you’re too hungover to ski the next day.

Maybe this resort attracted you for its family fun and charming Alpine Morzine accommodations. This is certainly one of the best family ski resorts in France, but after you put the kids to bed there’s plenty for the adults to get up to. 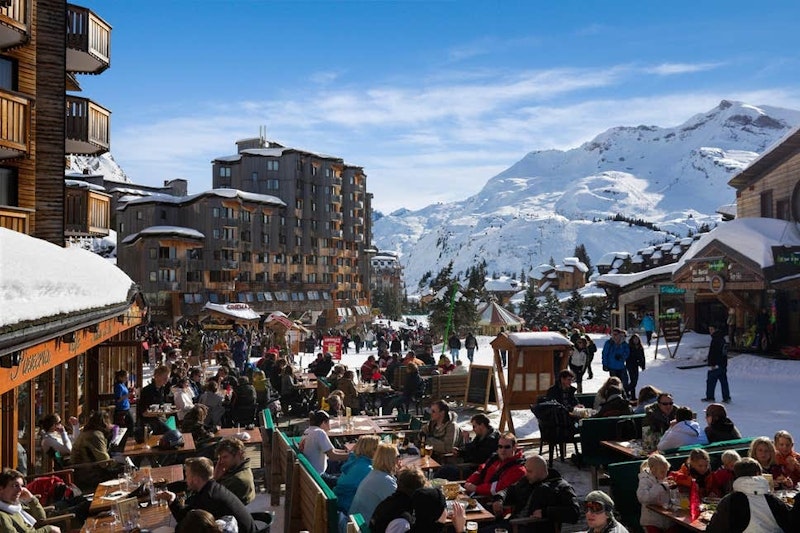 Photo from the Standard

Some of the best party ski resorts are alive during skiing, not after. Meaning, you party in your snow gear, on top of the mountain, and then ski down to your Morzine accommodation after.

If you’re looking for bars in town, there’s also plenty of that available. Here are some of our favourite bars in Morzine:

Wine lovers will fall in love with this place. After all, the name, coup de coeur roughly translates to “falling in love”

There’s always something for beer lovers in the French Alps. A brasserie with a cold beer that pairs perfectly with a cold day out on the mountains.

This is an Irish bar that we hold close to our hearts. Good beer, live music, great atmosphere.

And if you’re looking for the dancing part of Morzine nightlife, look no further than l’Opera, Morzine’s main nightclub, open every day until 5 am.

Avoriaz is most famous for La Folie Douce, a self-declared “completely crazy, apres-ski where anything is possible, even sharing a beer with Lance Armstrong”. Perched at 1800 meters in altitude, this bar offers parties, food, drinks, and a phenomenal outside terrace with live music. 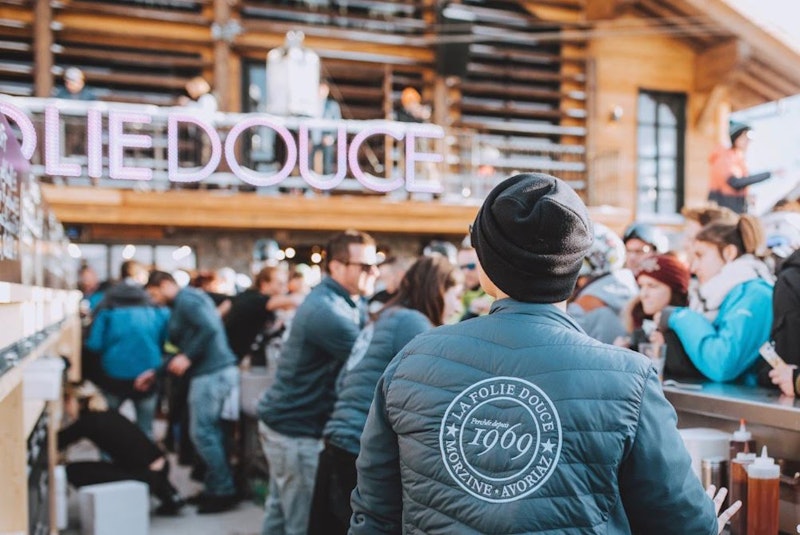 Avoriaz is best known as a family ski resort. But that doesn’t mean there’s nowhere to party. In fact, Avoriaz being a car-free resort, you can ski straight down to the party!

Some people come to Avoriaz-Morzine just for La Folie Douce! But Avoriaz also has another amazing gem, which is the Igloo Bar, a restaurant and bar made entirely of snow and ice (with a dancefloor!).

However, Avoriaz does maintain its family vibe, and you won’t find the same heavy nightlife you’d find in places like Chamonix. The only apres ski party you’ll find open very late in this Alpine town is Le Yak, which is a bar/nightclub open until 5:30 a.m. 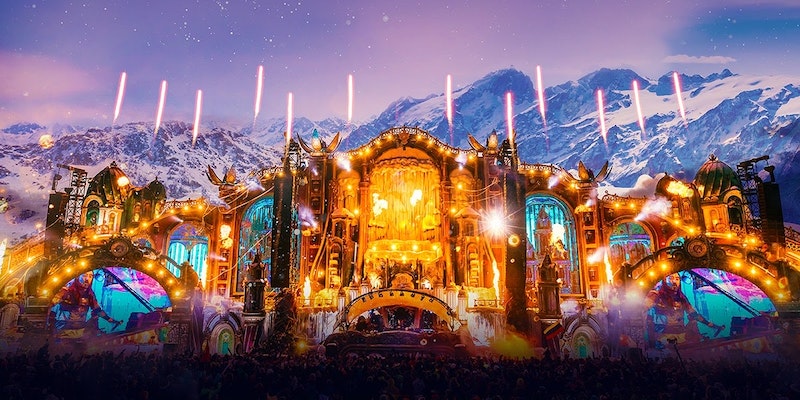 If you’re not around for Tomorrowland (or don’t like huge festivals), some cool places (apart of our Alpe d'Huez accommodations) are:

At 9:00 p.m., drinks are priced based on a stock market system. Prices change every 90 seconds! The atmosphere is lively and there are pool tables and TVs with sports on.

Open until 2 a.m., this tavern has DJs, live music, and food for the hungry!

L’Igloo - The Igloo is l’Alpe d’Huez’s nightclub, which is open until 4 am, and is just under Smithy’s Tavern.

This is the highest ski resort in Europe. Val Thorens apres ski is almost as famous as its pistes. Val Thorens attracts a university crowd as well as an older, more sophisticated crowd. And its party scene, as one of the best party ski resorts in the French Alps, caters to all. 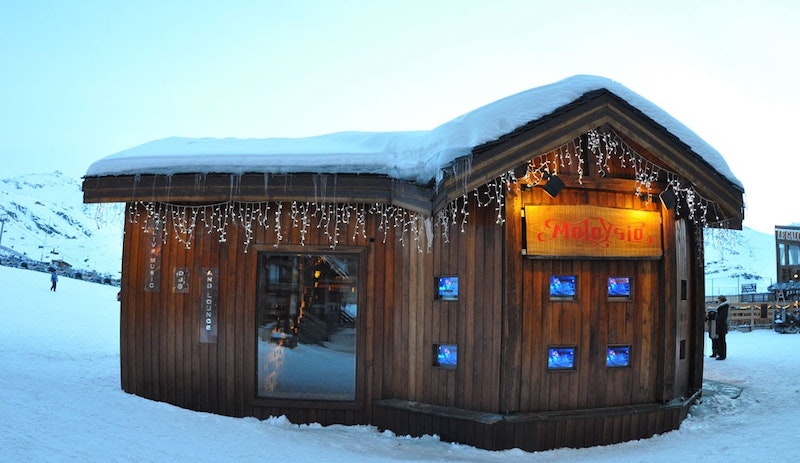 Entrance to the biggest nightclub in the Alps. Photo from SnowPlaza

In the town itself, you have the largest nightclub in the Alps -- all underground. The Malaysia deceptively looks like a little hut in the snow above ground, but underground you have 700 m2 of floor ready to be danced on.

But if you’re looking for a taste of home during your apres ski in the French Alps, look no further than The Frog & Roast Beef, which is a British pub serving full English breakfasts and a good pint. They also have live music!

And if you’re looking for bars on the pistes themselves, Val Thorens has a couple to choose from:

Bar 360 has an outdoor terrace with live music where you can soak in the sun with a (really) cold beer. Don’t miss happy hour from 4-6 p.m.

Val Thorens is also home to one of the La Folie Douce locations, right on the piste plein sud. It naturally is one of the highest open-air clubs in Europe. Parties start at midday!

The French Alps have something for everyone. Fresh powder, phenomenal food, family fun and, of course, a great time with the copious choices of apres-skis. What more could you ask for during your ski holidays?

Have you tried any of these? What’s the best place you’ve been to? And if not, wait no longer to book your stay: